12 Best Things To Do in Cleveland

Cleveland is the largest city on Lake Erie, founded in 1796 and named after its first leader: General Moses Cleaveland. As a port city on the Great Lakes, with access to the Atlantic Ocean via the Saint Lawrence Seaway, Cleveland quickly became a hub of commerce connecting East and West.

Today, Cleveland is a diverse destination with something for everyone: from historic architecture and Presidential burial grounds to National Parks and pop culture paradise. Here are some of the top things to do in Cleveland, Ohio!

On the bank of Lake Erie, in the city where the term “rock and roll” was coined (by DJ Alan Freed), you’ll find a music lover’s stairway to heaven known as the Rock & Roll Hall of Fame.

The museum opened in 1995, celebrating its first class of HOFers with a concert for the ages, featuring performances by rock and roll legends James Brown, Bob Dylan, Jerry Lee Lewis, Aretha Franklin, and Johnny Cash. New inductees each year keep the star power flowing and the Rock & Roll Hall of Fame houses it all: exhibits, artifacts, archives, and interactive displays that bring you up close and personal with the characters and personalities that make your favorite Rock & Roll artists and songs feel larger than life. 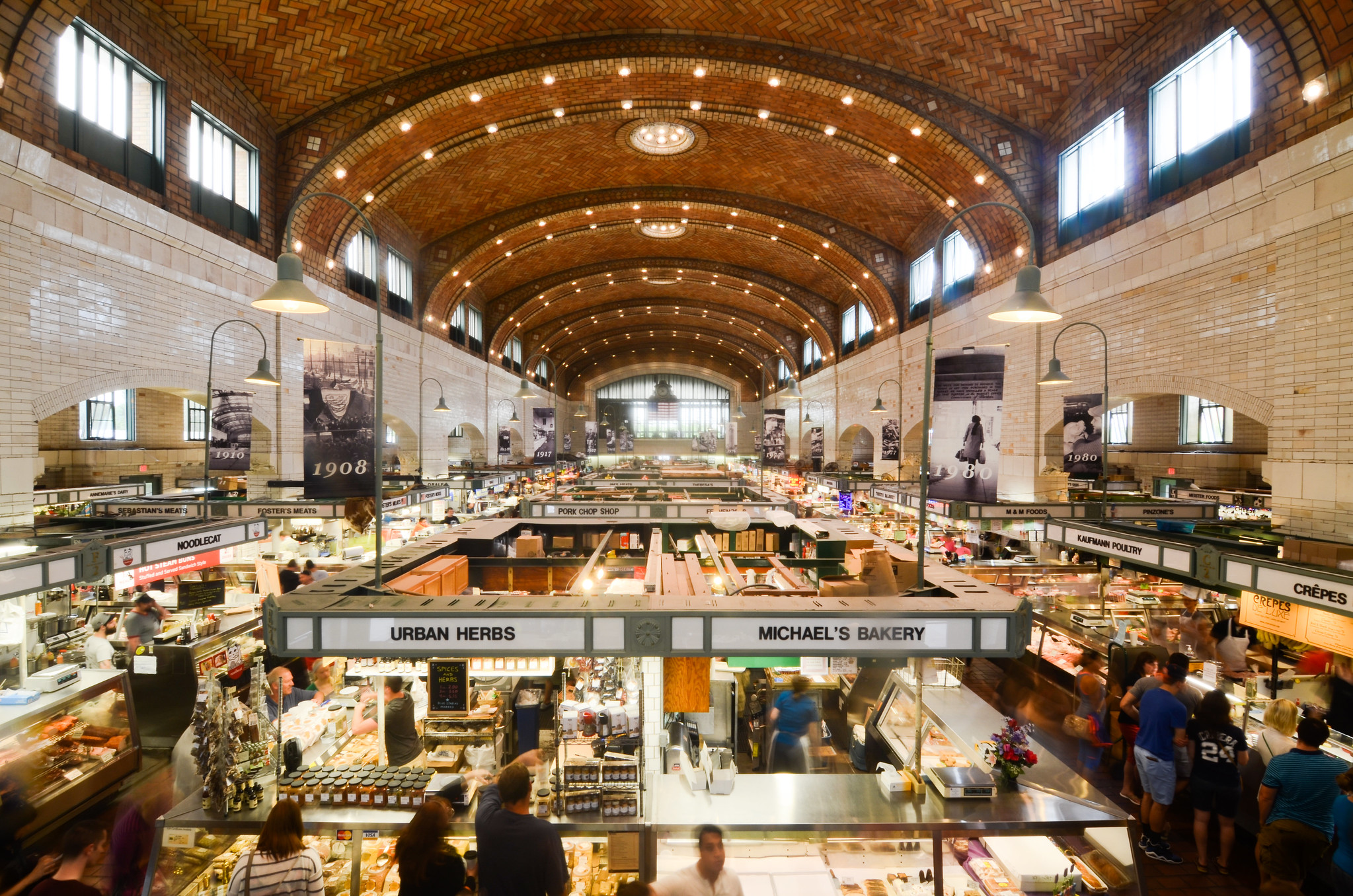 Since 1840, the West Side Market on 24th Street has been offering authentic ethnic cuisine, local delicacies, and a variety of wares to Cleveland residents and tourists, making it the oldest indoor/outdoor market in the city. Browse over 100 stalls from local vendors offering meats, seafood, fruits, vegetables, baked goods, dairy, flowers, ready-to-eat foods, spices and nuts. And if you’re only there to look, West Side Market is quite a sight: the brick Neo-Classical/Byzantine building is nothing short of beautiful. Wrapping around the City of Cleveland is a network of 18 parks, spanning 23,000 acres, connected by 300+ miles of trails for walkers, runners, bikers, and horseback riders. Following rivers and creeks through the region, the chain of parks is often called the “Emerald Necklace” for the way it appears to hang from the neck of Lake Erie, a nickname inspired by Boston’s similarly named attraction.

The Metroparks are responsible for a huge amount of Cleveland’s outdoor recreation, offering visitors much more than trails; you’ll also find lakefront beaches, golf courses, boat ramps, and even a zoo! The 183-acre animal attraction known as the “Cleveland Metroparks Zoo” is a must-visit destination when visiting the city. The zoo has come a long way from its humble roots in 1882, when it only housed native animals: today it’s home to 3,000 animals across 600 species and has become a complete family entertainment experience. Exhibits for the elephants, tigers, snow leopards, rhinos are particularly immersive and visitor favorites include feeding lettuce to giraffes and ziplining over eagles! 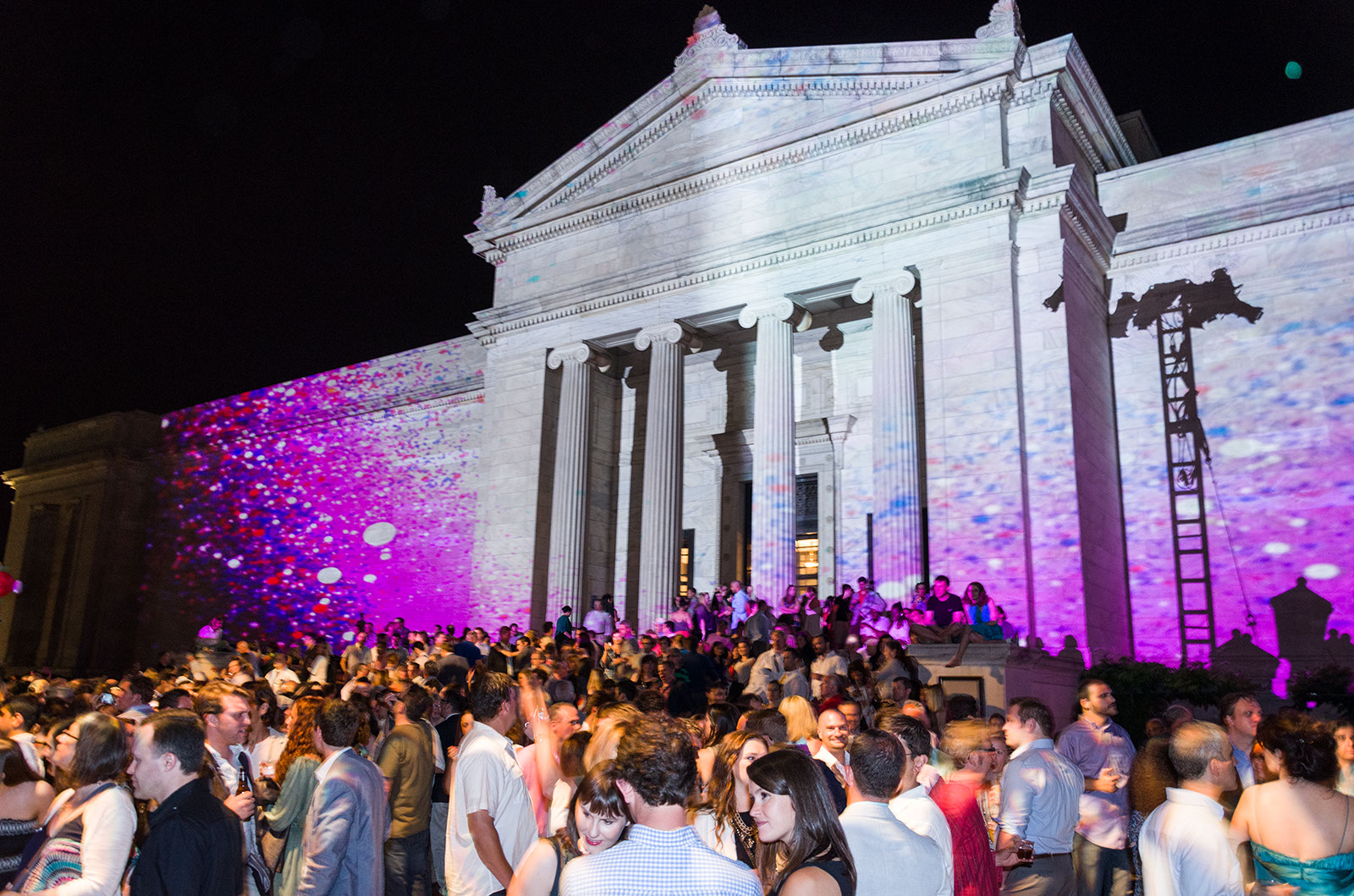 The Cleveland Museum of Art is arranged chronologically, showcasing more than 60,000 pieces of art across 6,000 years. The museum is relatively small but dreams big, with a goal of being “for the benefit of all the people forever,” since opening in 1915.

Its treasure trove includes works from Vincent van Gogh, Claude Monet, Salvador Dalí, and Pablo Picasso, and special events throughout the year have become some of Cleveland’s most highly anticipated annual activities.

Downtown Cleveland’s theater district, Playhouse Square, is the largest performing arts center in the United States outside of New York City. Theaters in the square were constructed in the 1920s, abandoned in the 1960s (thanks largely to the advent of TV), and ultimately renovated and revitalized to their modern glory.

The excitement never seems to stop at Playhouse Square, where all types of concerts, plays, musicals, and special events can be found on any given night. Catching a game at Progressive Field, home of Major League Baseball’s Cleveland Guardians (formerly the Indians), is always considered one of the top things to do in Cleveland. It originally opened as “Jacobs Field” in 1994, named after team owners Richard and David Jacobs.

A retro style ballpark modeled after Baltimore’s Camden Yards, Progressive Field was designed to boast great views of Cleveland’s skyline. Its distinctive lighting and layout, 19-foot left field wall dubbed “the Little Green Monster”, terrific views from every seat, and some of the best ballpark food in all of baseball keep people coming back to root, root, root for the hometeam. 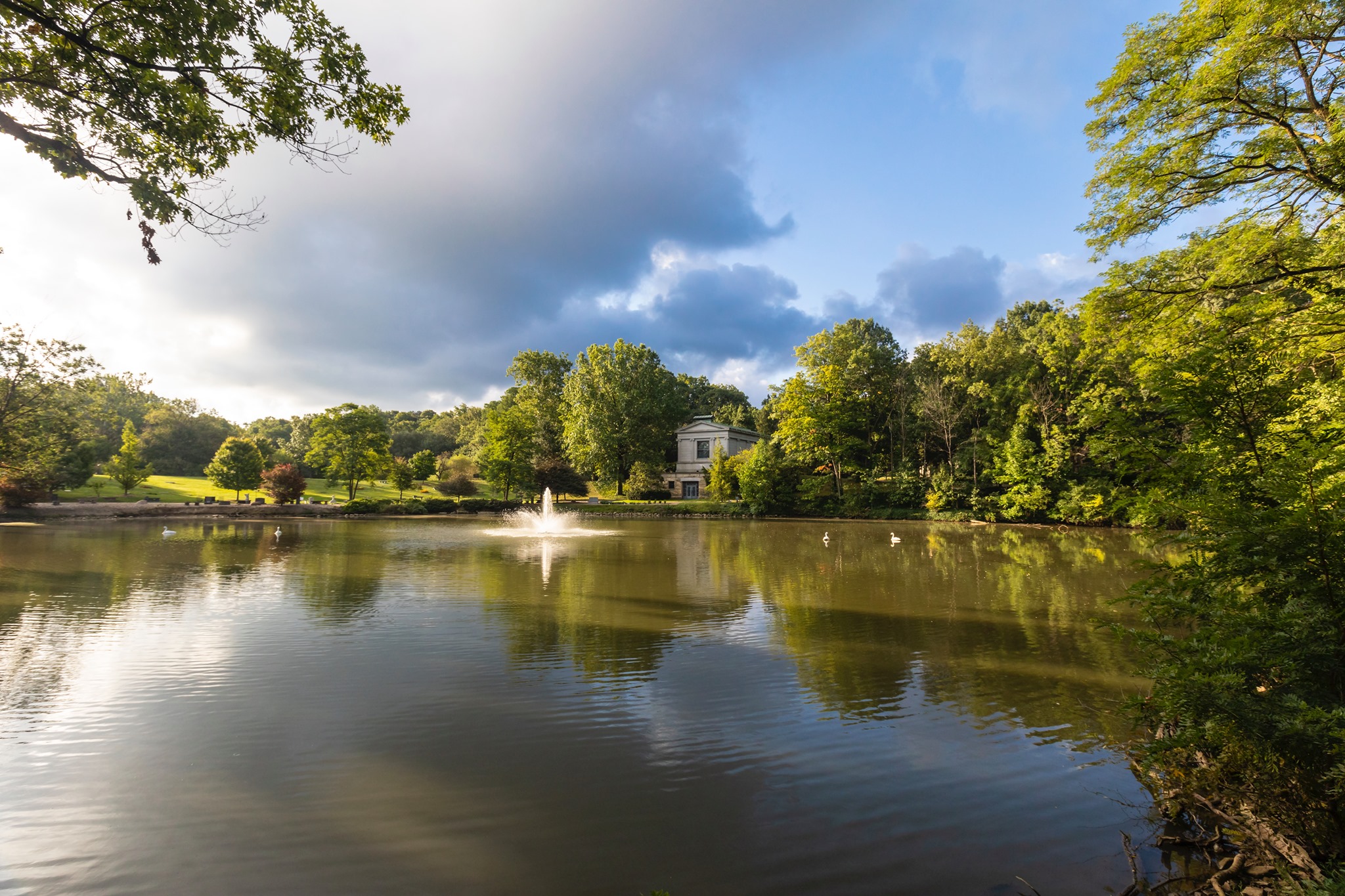 The lavish monuments and mausoleums found in Lake View Cemetery make its 285-acres worth exploring. The north side of the property has beautiful views of Lake Erie and throughout the property you’ll find the final resting place of many notable historical characters such as Newton D. Baker, Helene Hathaway Britton, Alan Freed, Elliott Ness, and John D. Rockefeller.

Two sites in the garden cemetery are of particular interest: a stunning memorial to assassinated President James A. Garfield is located at the highest point in the park, and the mighty Wade Memorial Chapel honors one of the cemetery’s founders (Jeptha Wade). 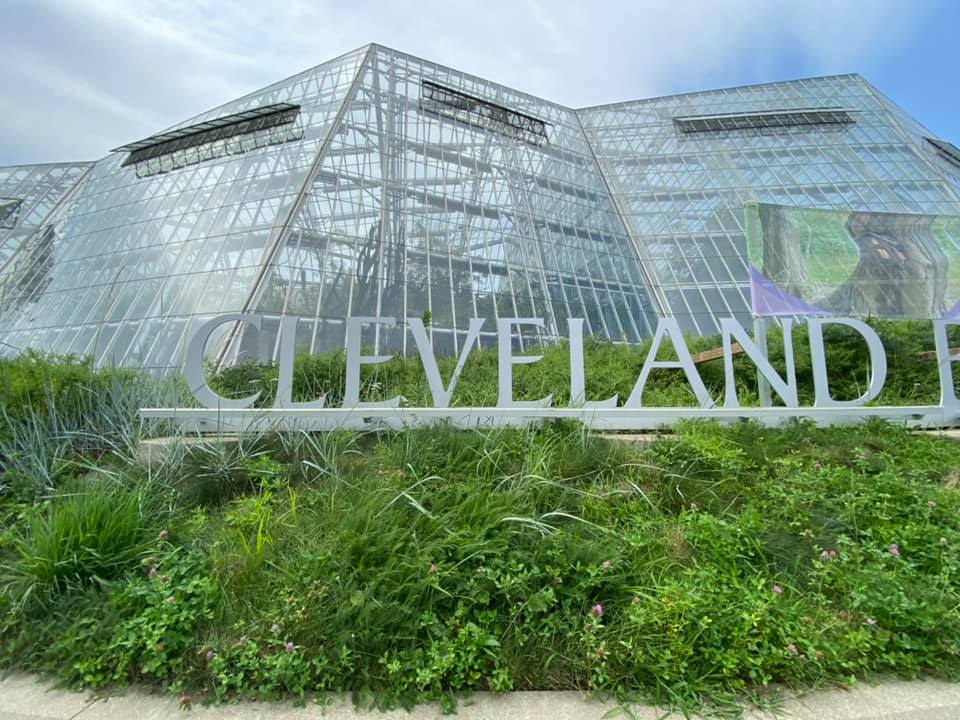 The Cleveland Botanical Garden’s focal point is a 17,000 square foot Glasshouse conservatory that’s filled with 350 plant species and 50 animal species, including the house favorite- butterflies. It’s surrounded by 10-acres of themed gardens that display topiaries, herbs, roses, and other delights along with an award-winning Children’s Garden.

Visitors will be be happy to find a 200-space underground garage that makes parking easy and a café, library, and gift shop that makes it fun to stick around. 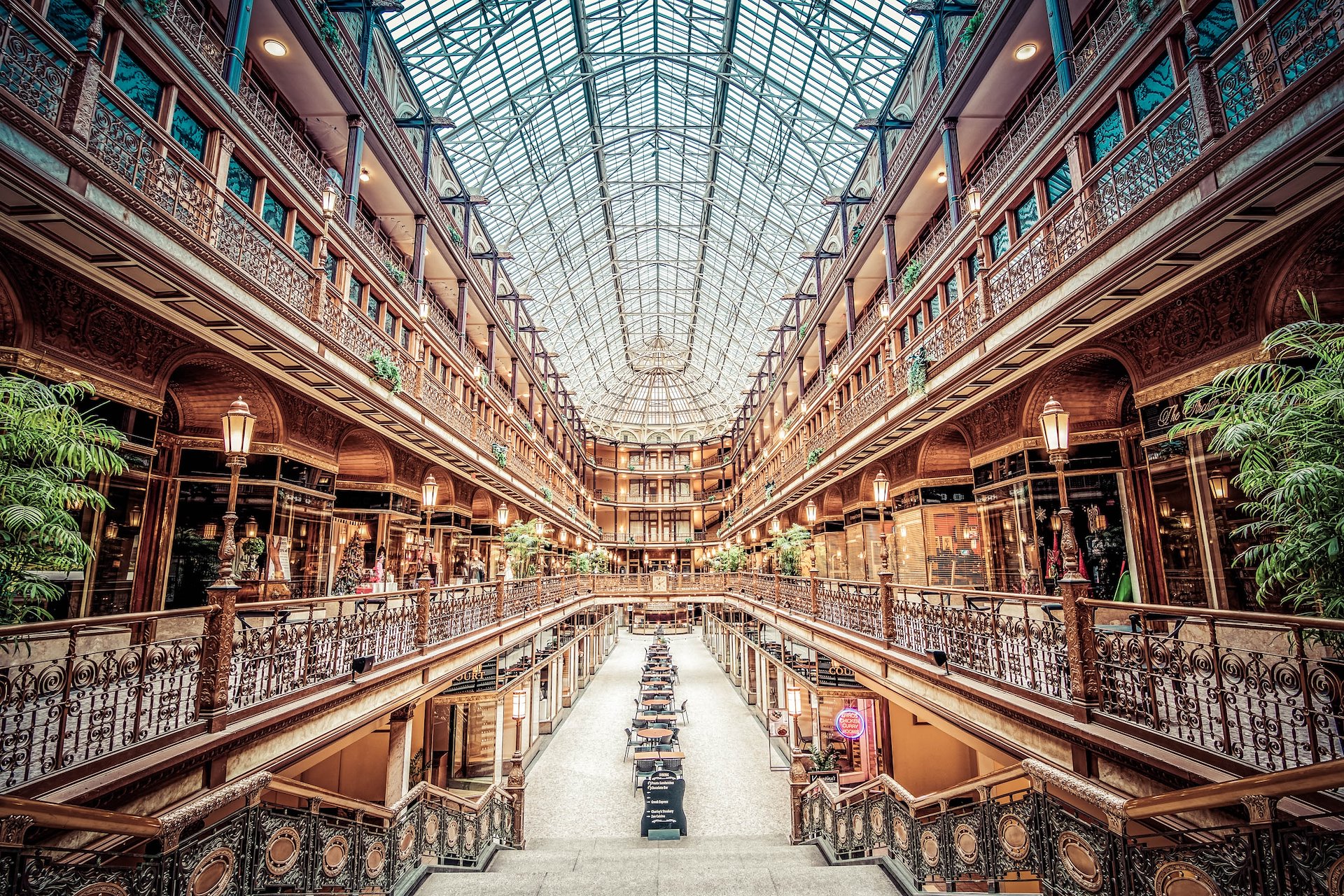 A couple steps into the Old Arcade in Cleveland will make you feel as if you’ve been transported into a different time- and you have. The magnificence of this 5-story Victorian-era arcade with 300-foot glass skylight is simply stunning. It first opened in 1890, became a National Historic Landmark in 1975, and in 2001 was redeveloped as the Hyatt Regency hotel.

Thankfully the first 2 floors of the atrium are still open to the public: grab a bite at the food court, do some shopping, and admire one of the earliest indoor shopping centers in the United States. 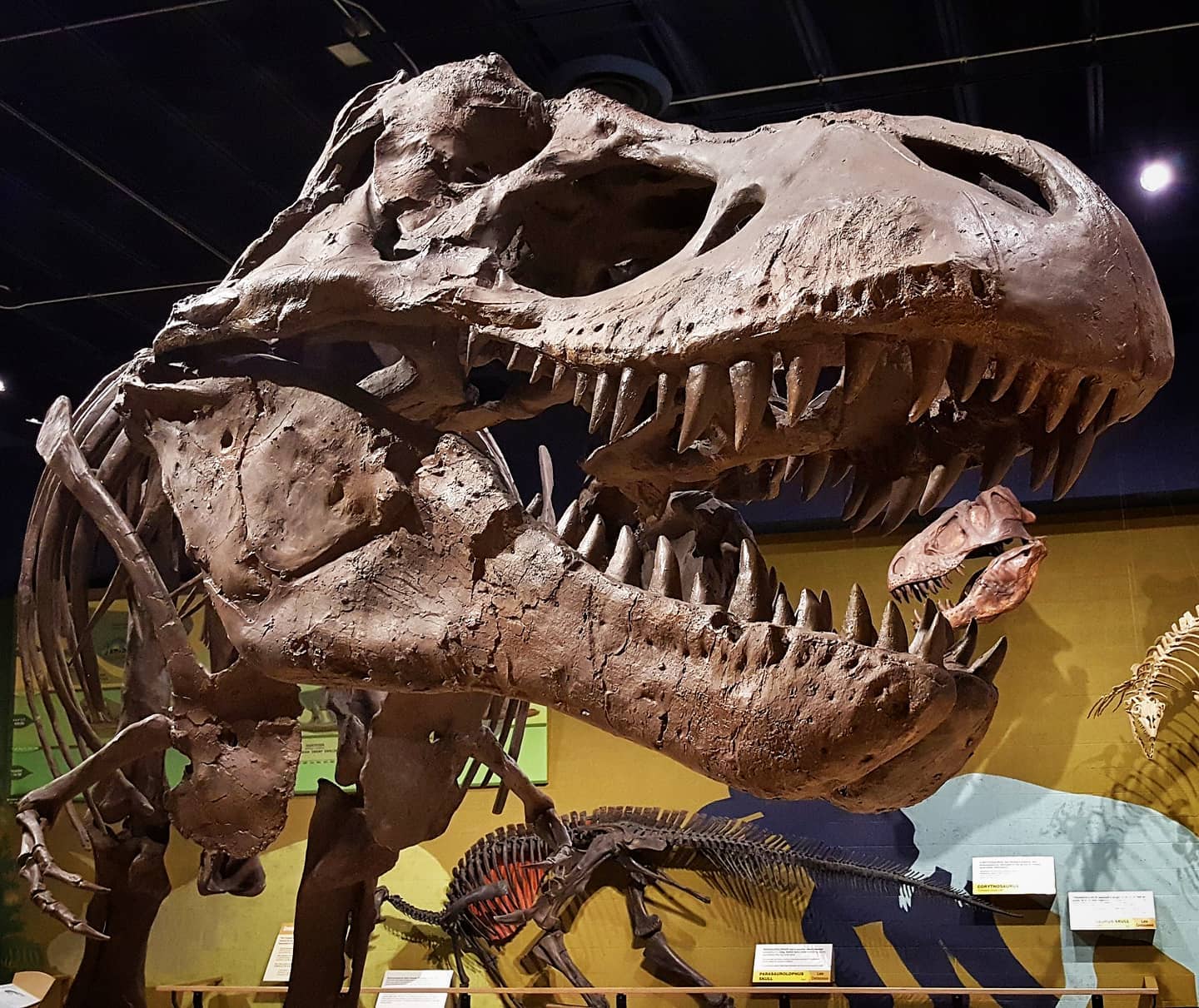 An extensive collection of artifacts and exhibits — both permanent and temporary — will astound and amaze visitors at the Cleveland Museum of Natural History. Highlights include a full-scale Stegosaurus model, T-Rex skull, taxidermy display of Balto the sled dog, moon rocks, a gem collection, 30,000 plant fossils, and a planetarium. The museum’s collection totals more than 4 million specimens, guaranteeing that there’s something everyone will want to explore. 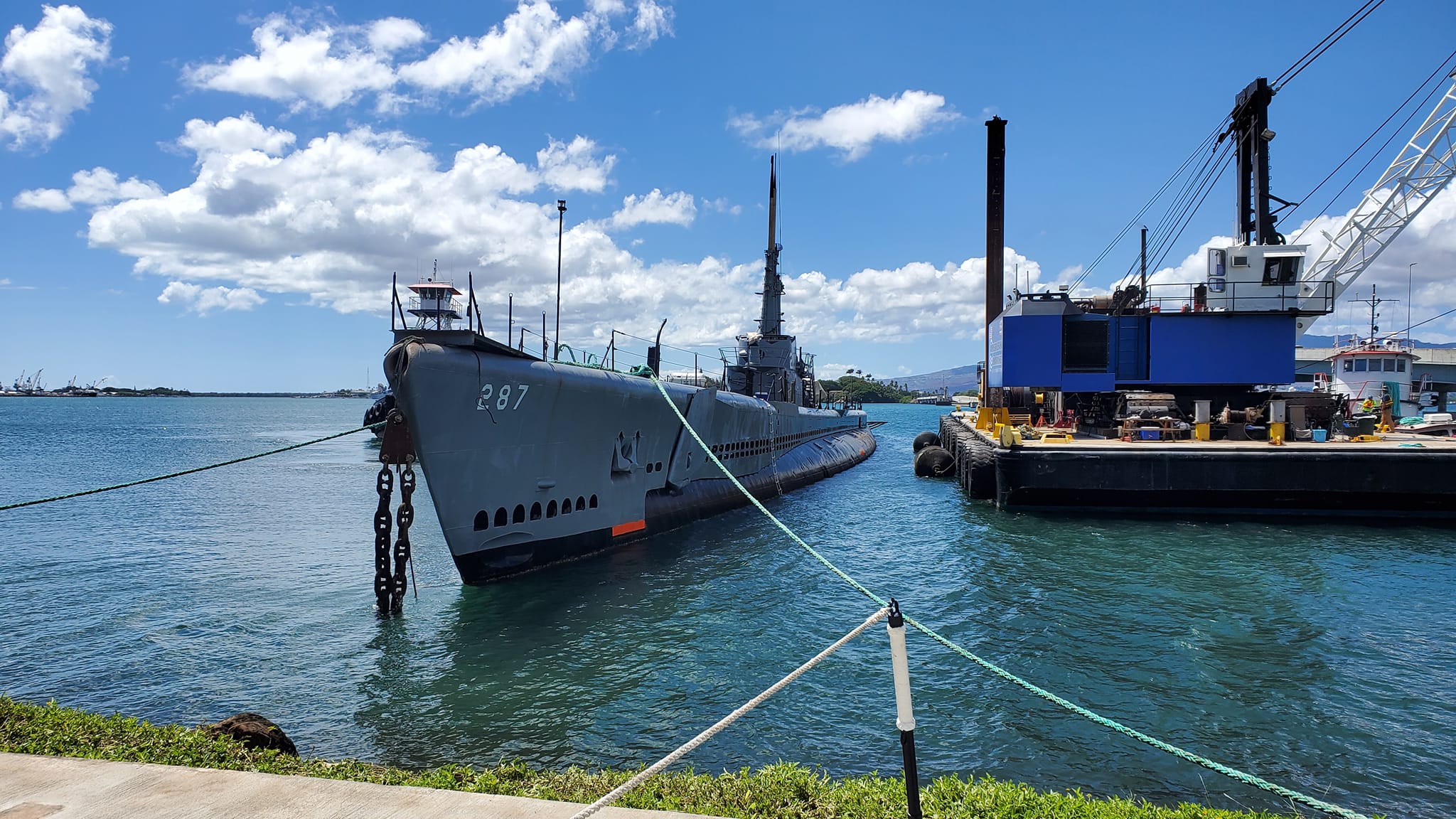 Next to the Rock & Roll HOF you’ll find a World War II submarine that sunk 12 enemy vessels and became the first in the world to perform a submarine-to-submarine rescue. It’s now a National Historic Landmark that allows visitors to jump aboard and take a tour of an incredibly well-preserved piece of naval history, complete with a Mark-14 steam driven torpedo.

The USS Cod’s final resting spot in Cleveland is fitting since it’s also a birthplace of sorts: the submarine’s 5 diesel engines were originally built at the General Motors Cleveland Plant. While you’re there, don’t forget to pay your respects to all the honorable men and women who lost their lives in World War II.